All of those adaptations keep animals cool in desert climates and can inspire sustainable innovations for humans. That approach — looking to nature for solutions — is called biomimicry.

The Biomimicry Center at Arizona State University is now offering a way for teachers to introduce these concepts to middle schoolers. The center has created BioConnect educational kits to be used in the classroom and has put all the resources from the kit online for any educator to use.

The BioConnect kits include a collection of natural artifacts such as rattlesnake skin, 3D-printed models to demonstrate biomimicry concepts and a weeklong curriculum that’s aligned to Arizona standards and Next Generation Science Standards.

The Biomimicry Center collaborated with the Phoenix Zoo and the Biomimicry Institute nonprofit organization, and the project was funded by ASU Women and Philanthropy.

The grant was awarded in 2020, but, like many other things, the pandemic forced the original idea to pivot, according to Lily Urmann, program coordinator for the Biomimicry Center and a graduate of the center’s master’s degree program.

“We partnered with the Phoenix Zoo because they have a cool outreach project called the ZooMobile that drives around the state and introduces kids to animals,” Urmann said.

“But the scope of the project had to change completely when they were no longer physically going around to schools. But we still wanted to introduce kids to biomimicry and nature regardless of whether we were actually there or not.” 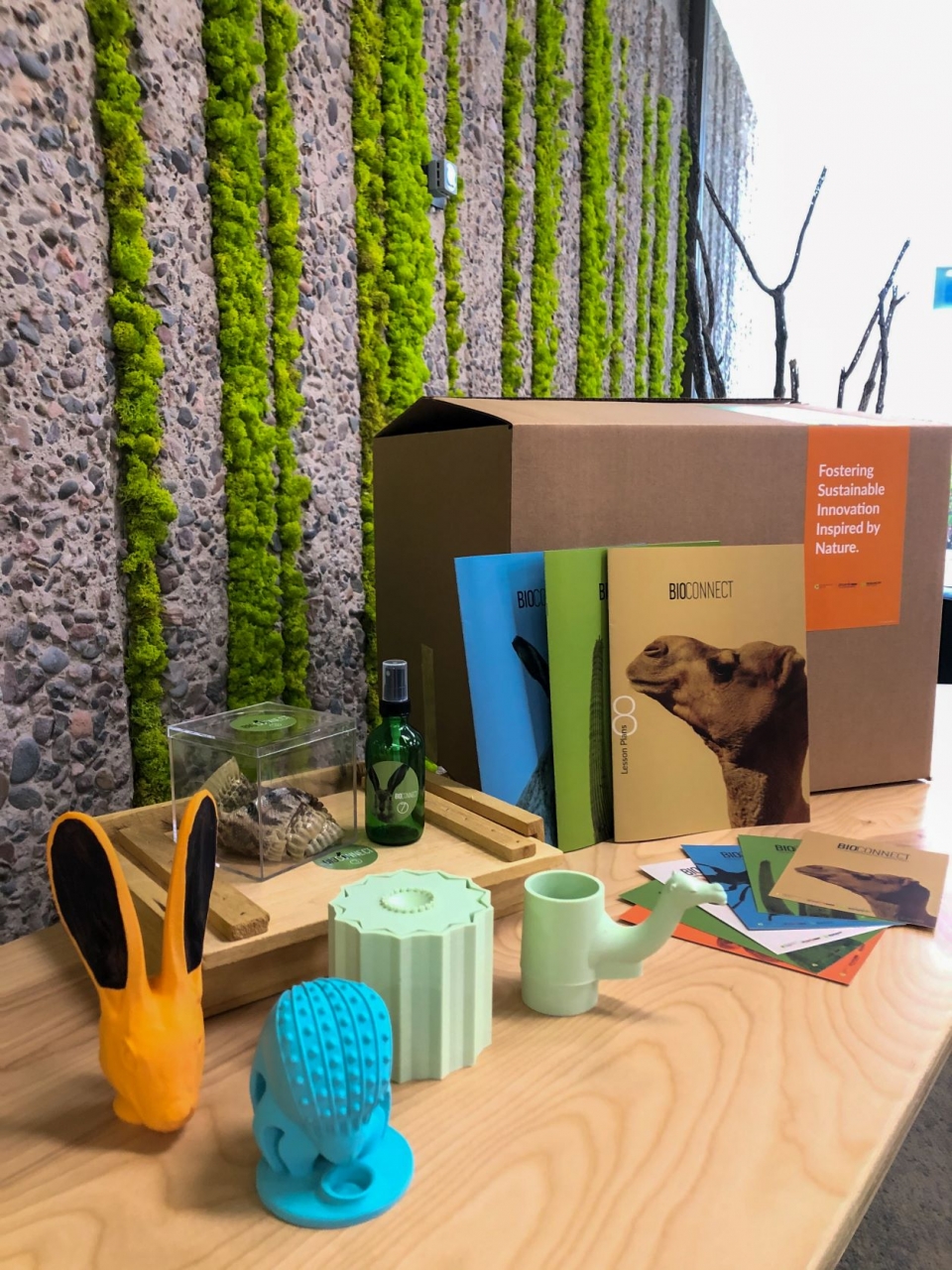 The BioConnect kits include lesson plans, 3D models and artifacts to teach students in grades six, seven and eight about biomimicry. Photo by Alfredo Moreno/The College of Global Futures

So the center designed kits based on the adaptations of desert organisms to send to teachers. About 20 kits will be distributed to school district science coordinators this month, with a few more going to the zoo, the center and the institute. Most of the kit resources, including the curriculum, inquiry cards, model specifications and videos from the Phoenix Zoo, are online. Teachers can create the models on 3D printers.

“There’s a model of jackrabbit ears, which has reactive paint, so when you put it under a lamp, it changes color to show how jackrabbits’ ears manage the heat,” Urmann said.

The kits also include several descriptions of real-life biomimicry examples, including Velcro, whose inventor was inspired by the way burr seeds attached to his dog’s coat, and a cooling system inspired by camel fur.

Leslie Hawkins, an education supervisor with the Phoenix Zoo, said that biomimicry is an abstract concept for kids to grasp.

“But the way they introduce these strategies really breaks it down into more of a tangible process for kids,” she said.

Hawkins worked on gathering video footage from the Phoenix Zoo to show the students how elephants, camels, Mexican gray wolves and desert tortoises adapt to the heat and lack of water.

“You wouldn’t think a desert tortoise could be so personable, but we have one and the footage really captures his curious and inquisitive self,” said Hawkins, a former classroom teacher who graduated from ASU.

The BioConnect curriculum ends with a design challenge, in which students collaborate on an invention to help humans live more sustainably in the desert.

“It’s more tangible when they can practice it — explore what nature is doing and how to apply that to their own design,” Urmann said.

Rosanna Ayers is the director of youth education for the Biomimicry Institute, a nonprofit based in Montana. She runs the institute’s Youth Design Challenge project-based learning experience and hopes the kits inspire more participation.

“The Youth Design Challenge is an extensive and rigorous process and we were seeing that some teachers needed smaller bites,” Ayers said.

“Students can explore biomimicry and if they want, they can launch off to the Youth Design Challenge or they can try the kit challenge again. One of the beautiful things about biomimicry is that you can come up with a variety of designs from one organism.”

The BioConnect lesson plans include content from AskNature.org, a digital database of educational resources housed by the Biomimicry Institute, Urmann said.

“We introduce biomimicry as an ancient process and also as a new field of study created in the academic space in the last 30 years,” she said.

Top photo of a desert tortoise courtesy of the Phoenix Zoo.