Simulating a sustainable future of water, energy and food in Phoenix

Phoenix is a rapidly growing metropolitan area in a desert. As the population increases, it will be more and more challenging to supply water, food and energy — three essential resources that are interconnected in complex and competing ways.

“Water supply in the region is energy-intensive. Energy generation needs water, and food production needs energy and water in the form of irrigation for agriculture in this hot and dry climate,” says Xin Guan, a civil, environmental and sustainable engineering doctoral student in the Ira A. Fulton Schools of Engineering at Arizona State University who is studying hydro systems engineering and the food-energy-water nexus in the Phoenix area.

“Understanding the interconnection among these three sectors gives us the best opportunity of achieving a win-win-win solution for people in the area,” she says.

For the past four years, Guan has been studying the food-energy-water nexus through an integrated simulation approach. This method allows Guan to thoroughly understand the interconnections between each sector and observe feedback from one sector to another as various climate and policy factors change.

In her research, Guan takes a localized approach to simulate how global climate systems affect the agricultural sector in the Phoenix Active Management Area, which governs groundwater use in the Phoenix metropolitan area and surrounding agricultural land. Specifically, she is analyzing how temperature changes and water shortages affect crop production.

“The small-scale simulation at the irrigation district level can capture unique details of the local area and, in turn, helps local policymakers to make policies more adaptable to local conditions,” Guan says. 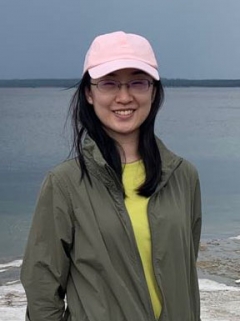 This research earned Guan the first-place 2021 Central Arizona Project Award for Water Research — a competitive award from the water resource development and management organization that recognizes research excellence from undergraduate and graduate students at Arizona’s colleges and universities. This achievement marks the first time a Fulton Schools student has won the award.

The award is given to unpublished research that addresses water issues in Arizona associated with the Central Arizona Project and the Colorado River.

Guan’s findings are especially relevant to the future of water — as well as energy and food — in the area. Her simulations determined that the projected temperature increase of 5 degrees Celsius by the end of the century will likely cause reductions in central Arizona’s crop production by an average of approximately 16% and 26% for the moderate and intense warming scenarios, respectively.

In addition to climate change, Guan has analyzed the concomitant effects on the agricultural sector in central Arizona that would be caused by water shortages under the Colorado River Drought Contingency Plan, a set of agreements for protecting the Colorado River system in the Southwest through water conservation and reduction efforts. Guan's research predicts that water shortages could further reduce crop production, outweighing the impacts of rising temperatures due to climate change if water allocations are reduced by more than 10% of their current amount.

“The findings of this research are very timely and relevant given the recent declaration of Central Arizona Project water shortages for the agricultural sector in Arizona,” says Giuseppe Mascaro, a Fulton Schools assistant professor of civil and environmental engineering and Guan’s adviser.

Guan’s simulations would help make the complexity of the food-energy-water nexus more accessible for policymakers by allowing them to test various present and future “what if?” scenarios.

“We can test different policies by embedding them into the model and simulating the responses on water, energy and food sectors,” Guan says. “We can have a direct outlook on the pros and cons of the policy and help policymakers assign values to the trade-offs and optimize policy for all three sectors.”

Mascaro says he is proud of Guan for earning this recognition and for what she has achieved so far through her research, which is supported by a National Science Foundation’s Innovations at the Nexus of Food, Energy and Water Systems, or INFEWS, program grant project. Mascaro is a co-principal investigator for the project titled, “Flexible Model Compositions and Visual Representations for Planning and Policy Decisions for the Food-Energy-Water Nexus.” 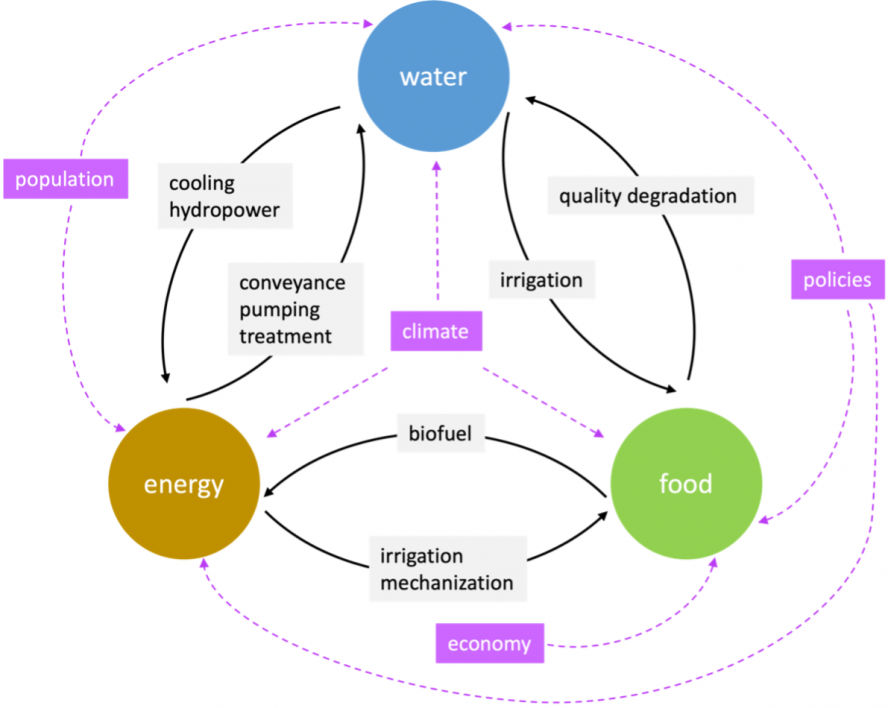 The food-energy-water nexus is a complex interconnectedness of three vital sectors affected by climate, a region’s population, the economy and policies. Each of the three resources — food, energy and water — rely upon each other, affect each other and are affected by each other in numerous ways, which makes policymaking in these areas difficult and full of unintended consequences. Graphic courtesy of the ASU Visual Analytics and Data Exploration Research Lab

“The Central Arizona Project Award for Water Research is a well-deserved accomplishment for Xin after four years of hard work, during which she has acquired deep knowledge of water and climate challenges in the Southwestern U.S. and developed new models to address these challenges,” Mascaro says.

“Receiving an award from a major stakeholder of the project like the Central Arizona Project is also a clear recognition of the relevance and impact of Xin’s research and, more generally, of the work done by all scientists involved in this NSF grant.”

Guan says it’s an honor to have been selected for this award, which also gave her the opportunity to present her research at the Arizona Hydrological Society Symposium on Sept. 17.

“It is a great recognition of the effort I put into this research and an acknowledgment of the value of my work,” says Guan, whose goal is to use civil, environmental and sustainable engineering principles to generate solutions for a sustainable future for humanity. “It is also a good opportunity to show the research to policymakers as well as to contribute to a better community.”